Concrete is the most-used manufactured material in the world, with nearly three tons per person used annually.  Its benefits to society are immense, as it is used to build schools, hospitals, apartment blocks, infrastructure, and more.
Home > News

On April 15, the world watched as the Notre-Dame in Paris, constructed eight centuries ago, nearly saw its end in the historic fire that devoured its roofs. Now, Belgian ecological architecture firm Vincent Callebaut Architectures (VCA) proposes a design for the cathedral that brings history, science, art, and spirituality together.

The firm presents a transcendent project, a symbol of a resilient and ecological future that offers a set of solutions inspired by biomimicry that VCA defines as a fairer symbiotic relationship between humans and nature.

The Palingenesis project, in Greek meaning ‘rebirth’ or ‘regeneration’, aims to assimilate the venerable stone nave to blend in naturally as a vegetal graft.

From the four gables, the original geometry of the 10-m (33-ft) high attic has been respected. As it moves toward the transept cross, its triangular section and steep, 55-degrees pitched roofs gradually stretch to shape a vertical spire.

Respecting the inherent principles of descent of the structural loads of the building toward the flying buttresses and the inner fasciculated pillars, the four roofing lines and the four lines of the roof’s ribs bend and join together producing a parametric and light geometry. 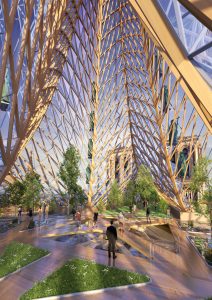 Constructed with cross-laminated timber (CLT) beams pre-stressed with carbon fiber slats, the new oak frame seeks to use the minimum amount of material needed to ensure a low-carbon footprint, while offering the greatest transparency to the cathedral.

The four hip rafters are oriented toward the cardinal points. Between the four ridges, which give the roof its sophisticated character, their curves reincorporate one above the other the monumental, wrought-copper statues of the twelve apostles.

The rooster found in the rubble the day after the disaster will crown the spire again.

Solar and ventilated roof
A new architectural ‘graft’ will turn Notre-Dame into a positive energy building, designed to produce more energy than it consumes. Through energetic solidarity with the body of the historic monument, the contemporary, three-dimensional Gothic stained glass graft produces all the electricity, heat, and passive ventilation the cathedral might require.

To avoid any greenhouse effect, 3D crystalline scales open at the bottom of the frame along the acroterion of the nave and transept, creating a natural airflow toward the top of the spire, which mimics a wind-powered chimney.

Further, this roof-spire in the cathedral attic provides a thermal buffer space, which accumulates hot air in winter, and vents with fresh air in the summer through the evapo-transpiration of plants.

Urban farm
At its heart, the Palingenesis project features a garden serving aesthetic and nourishing purposes.

This urban farm is arranged atop the Latin-cross plan of the roof and set in planters, which essentially redraw the layout of six-part vaults on the ground. This geometric garden ‘à la française’ relies on a double-deck structure with light soil to grow its fruits and vegetables along the nave, from East to West, from the two towers to the apse. In the North-South axis, the roofs of the transept hosts aquaponic basins feeding plants with natural, fish fertilizers. Moreover, these water mirrors expand the place by reflecting the rose windows on the North and South side gables.

A choir bathed in natural light
The large arched vault of the intertransept would be rebuilt in structural glass around its four stone ribs, pushing the thrust toward the corners. Natural light would highlight the emblematic identity of this place at the intersection of the main branch of the nave and the transept. The history of the place and its terrible fire would be retranscribed architecturally, offering a new divine atmosphere from the narthex of two spans located between the towers.