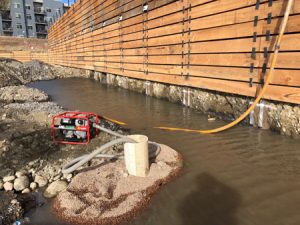 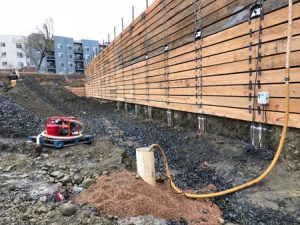 What a difference a day makes. Dewatering Reve’s south excavation utilizing filtered portable sump well installation. Before and after shots are shown above.

To install the wells, the dewatering firm utilized a hydraulic drilling rig to advance the 762-mm (30-in.) diameter borehole to the designed termination depth of 10 m (32 ft), excavating the extensive layer of sand, gravel, cobbles, and boulders. Additionally, by utilizing a powerful rig, the project team was able to penetrate nearly 3 m into the underlaying bedrock, creating a ‘sump-effect’ along the entire excavation footprint. This allowed the dewatering team to draw down the water further, closer to the bedrock/alluvial interface.

You May Also Like  ARMA names best in asphalt roofing

Leonard said, “Selecting the proper filter material and placement method was very important. By pre-filtering the groundwater prior to collecting it in the common discharge manifold and ultimately through groundwater treatment-filtration equipment installed at ground surface, additional costly treatment measures were avoided by preventing premature clogging and fouling of the treatment equipment. Each sump pump was also fitted with a liquid level control device that turned the pump on and off, based on the water level within the sump, preventing the pumps from running dry and causing premature pump failure.”

Cleaning of water prior to discharge

From the deepwells, the groundwater was directed to Boulder’s Left Hand Ditch, directly adjacent to the site. However, as is true of many construction sites along Denver’s front range, the preliminary geotechnical and environmental sampling reports revealed contaminated groundwater.

Following the approval of the remedial discharging of the surface water permit from the Colorado Department of Public Health and Environment (CDPHE), the project team developed a remedial activities management plan to reduce the pollutants of concern to below the limits set forth in the permit.

The groundwater treatment plan included the introduction of sodium hypochlorite (NaClO) into the dewatering influent water to oxidize iron (Fe), and manganese (Mn). Caustic acid was also dripped into the tanks as a means of controlling pH, further promoting the oxidation of the metals. These reactions took place in two, 79,494-L (21,000-gal) flocculation tanks. From the flocculation tank, the water was pumped through two, 12-unit bag filtration pods to capture the flocculated metals. Granular activated carbon was added to the treatment train to remove volatile organic compounds (VOCs) and residual chlorine in the treated water.

You May Also Like  Recognizing the top 10 LEED states

“This process has proven effective and cost efficient in achieving the desired results. The system was designed for flows up to 1893 L (500 gal) per minute,” added Leonard added. “Once the site was dewatered, the system was resized for lower flow rates, significantly reducing the area required to accommodate the equipment on an already congested site—a benefit to this near-zero lot line project—returning pure, drinkable water to the Left Hand Ditch.”

Tony Brace, general superintendent of Colorado, Southern Land, said, “This project, like many others, was different in the field than it was on paper. For example, the discharge manifold was modified in the field as it was being laid. The dewatering team had the flexibility to work with the other trades, giving access to the people that needed it, which kept the project on time.”

David Giles is president of TerraFirma Earth Technologies. Giles has a BS in geology from Iowa State University and 33 years of experience in developing and implementing design-build solutions for construction dewatering and groundwater control using deep wells, wellpoints, and ejector systems. He enjoys collaborating with project teams to find the approach that will yield the highest value. Giles can be reached at dgiles@tfearth.com.