Sound isolation between rooms can be important for speech privacy. For example, in patient exam rooms in a medical building, conversations between patients and their doctors are meant to be confidential.

When discussing how to secure the openings of a building, physical security commands the lion’s share of attention, with concerns about unauthorized access and fire typically Being at the forefront of any list of potential threats.
Home > News 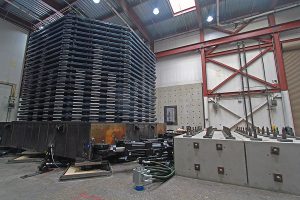 University of Nevada, Reno recently got a Large-Scale Laminar Soil Box System, an experimental facility for analyzing the complex interactions between structural systems, such as buildings and bridges, and the surrounding soil during an earthquake.

Housed in the university’s earthquake engineering complex, the soil box system—one of the largest in the U.S. and comparable in size to the largest in the world—is a collaboration between the University of Nevada, Reno, and Lawrence Berkeley National Laboratory (Berkeley Lab). The latter is managed by the University of California for the U.S. Department of Energy (DOE), which supported the design and construction of the facility. The facility is positioned to become a resource for DOE researchers and scientists who focus on seismic safety.

The system was designed, engineered, and constructed by faculty and technicians at the University’s Center for Civil Engineering Earthquake Research, with the support of area contractors and manufacturers.

The system can displace and accelerate soil in two directions simultaneously and with the same force as a strong earthquake. It is so powerful that the designers had to build in safeguards to prevent it from destroying itself during experiments. The hydraulics are controlled by custom software, and the box is equipped with a suite of sensors for scientists to gather datasets for their computer simulations.

David McCallen, project leader, director of the University’s Center for Civil Earthquake Engineering Research, and a senior scientist in Berkeley Lab’s Earth and Environmental Sciences Area (EESA), says “The soil box system is helping us understand and refine how we model the complex interaction between the soil and a structure. Our objective is to make realistic models of specific interactions—for example, what happens to a 20-story building very near California’s Hayward fault during a large-magnitude earthquake? And add them to our existing large-scale simulations. We want to model all the way, from the fault rupture, through the ground, to the structure, to see how buildings and other infrastructure in an entire region will respond [to an earthquake].”

“It’s important for DOE and National Nuclear Security Administration (NNSA), to invest in this to ensure that the large, complicated, one-of-a-kind facilities we build are designed to protect the country’s research, defense, and energy-generation needs; but the findings have an added benefit of helping engineers and architects in the public and private sector build a wide range of earthquake-resilient structures,” James McConnell, associate principal deputy administrator for DOE’s NNSA said.